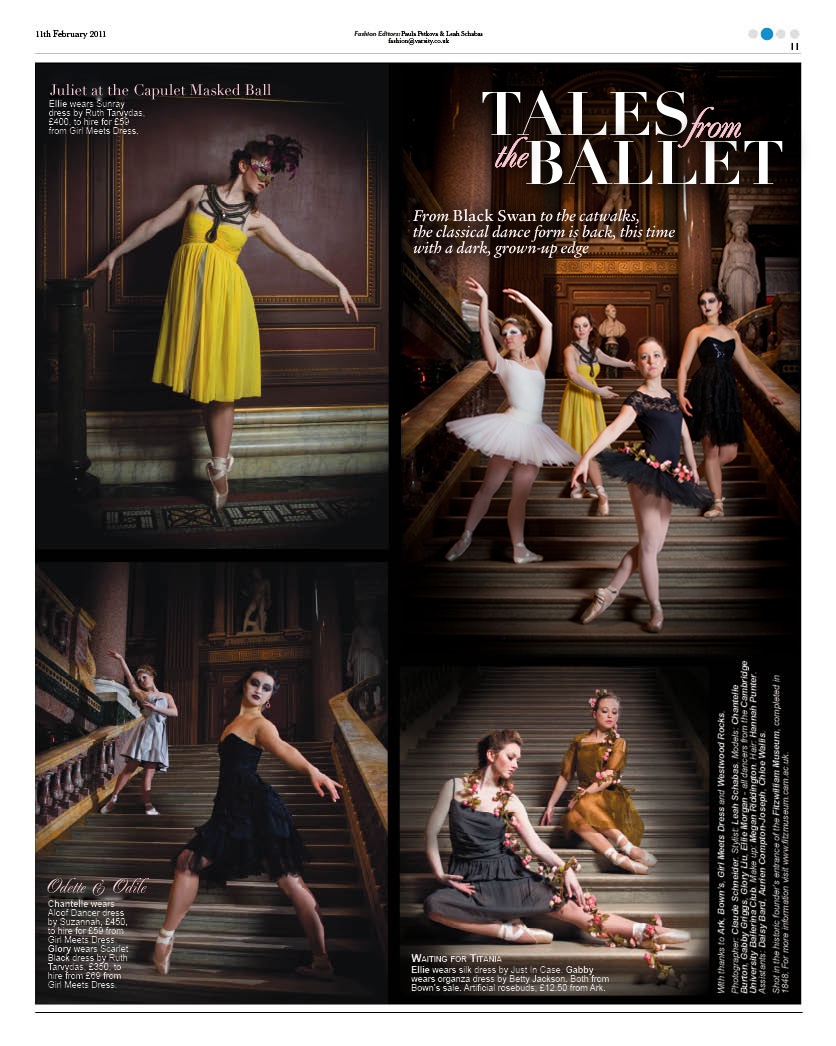 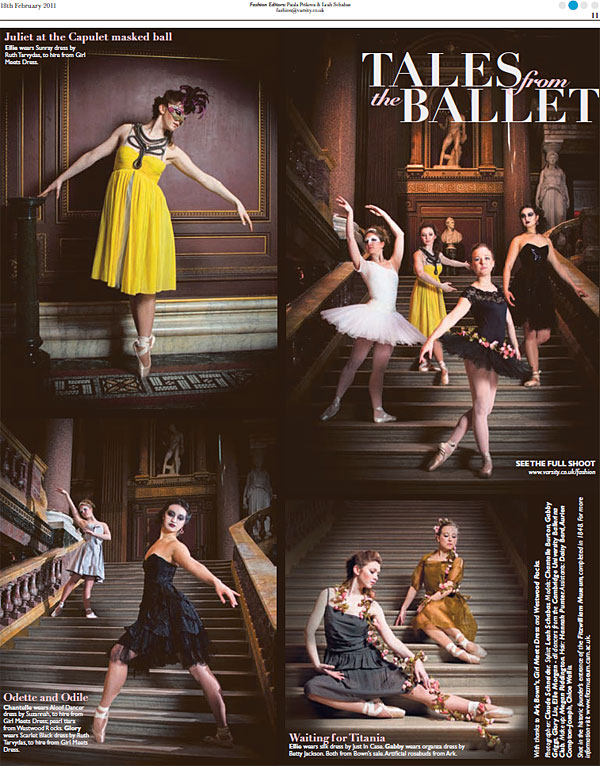 I started the Cambridge Ballerina Project in June 2010, and have since photographed 13 ballet dancers from the Cambridge University Ballet Club. The images caught the attention of the current Varsity Fashion Editor, Leah Schabas, who approached me to be the photographer for one of the newspaper’s fashion spreads. She had an idea that combined ballet and fashion (not necessarily because of the popularity of Black Swan, but it would definitely scratch the public’s itch for more ballet imagery).

We met weeks before the spread was to be published in the paper, and bounced emails back and forth about ideas and logistics. She arranged permission to shoot in the Fitzwilliam Museum, and acquired designer dresses and accessories from various sources. I provided contact details for hair and make-up artists (both Cambridge students I’d worked with before), and the ballet club president nominated 4-5 dancers as the models. Unsurprisingly, I’d already met and shot with them all before, except for Glory, who was to play one of the leads in the forthcoming annual ballet show. Sadly, Jenny had pulled a hamstring in the ADC dance show Inspired, so wasn’t able to take part in the shoot. These were all the models I would have chosen, as they are all truly beautiful dancers and models.

Our shooting slot in the Founder’s Entrance of the museum was from 9am – 12:30pm. This meant that hair and make-up started at 6:30am! I joined them at 8am to get some preparation photos, and also because I prefer to be involved in the whole creative process, not just during the shoot. Megan Riddington once again did a great job with the make-up, and Hannah Punter (a ballet dancer whom I met during Inspired) managed to make ballet buns look beautiful.

At 9am (or a while later as the finishing touches were being done to hair and make-up), we braved the winds and walked to the back entrance of the Fitzwilliam Museum, signed in as contractors, and got set up / changed. I already had firm ideas about shooting angles in the vast marble atrium, and Leah was on hand to match up dancers, dresses and their accessories.

The enclosed location, off-camera lighting, and well-defined “fashion” brief made this feel more like a studio shoot than one of my usual Cambridge Ballerina Project shoots, but I still relished having such beautiful muses with whom to create and capture ballet AND fashion imagery that I’ve been focusing on for the last year.

I normally work on location or in a studio with just the model, so it was great to work with a team and end up with a set of images whose sum is greater than its parts.

A very hearty thank you to all involved:

A model’s perspective of the shoot: http://gloriousbritannia.wordpress.com/2011/02/19/day-in-the-life-of-the-black-swan-behind-the-scenes-of-the-varsity-photo-shoot/