Our priority over the next few days was to climb Table Mountain, which was very weather-dependent (the wind had become rather over-powering as of today). Also, we wanted to climb Table Mountain with the yet-to-arrive Canadian, Glen. He didn’t show up at the airport when his flight came in, and there was no record of his having checked in at London either! With some of Mark’s friends (another South African called Mark, would be too confusing to go into any more detail!) searching for the missing Canadian, we headed south to explore some of the coastal towns near Cape Town.

First stop – Muizenberg, a once-popular seaside resort nicknamed “Jewzenberg”, it had fallen into dis-repair, but was undergoing re-development (as evidenced by the construction work we witnessed). Nevertheless, the town had plenty of character, especially the brightly-coloured huts along the beach. 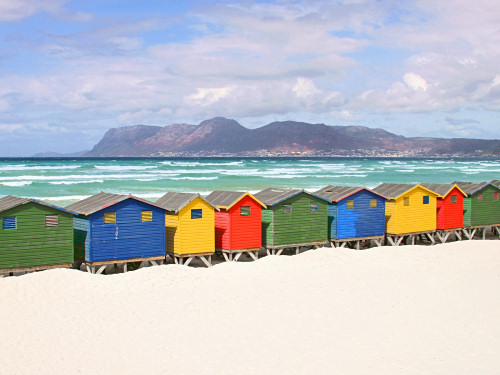 Next stop on our tour around the Cape Peninsula was Kalk Bay, a picturesque fishing village. We wandered along the harbour wall, spied some seals playing the choppy waters, and passed by fishermen fixing their lines. Colourful boats, fresh fish being sold, and seagulls – just what you’d expect from a fishing harbour. Our appetites whetted by the sight of freshly caught fish (and its being around noon), we had some delicious fish and chips at Kalky’s, which proudly promised to serve the best “Feeesh und Cheeeps” in Cape Town :) And it probably was. 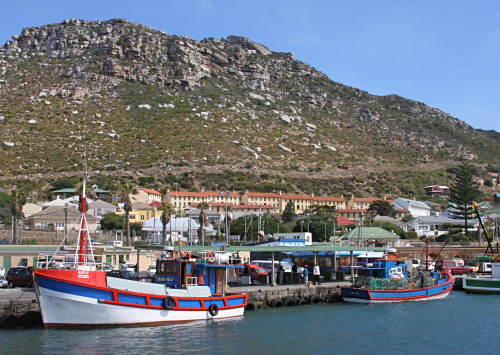 Our hunger sorted, we headed on to the main attraction (for me at least) – Boulders Beach, and the colony of African Penguins. The car park by the beach had these amusing warning signs:

Walking from the car park to the main tourist beach (Foxy Beach), we saw several penguins lazing around in the shrubs and dirt just behind a fence, a good hundred metres or so up and along from the beach. How and why they ended up here we weren’t quite sure. At the entrance (the beach is a National Park), we purchased our Wild Cards (to be used for Cape Point National Park and the Kruger Park), which was considerably more expensive for non-nationals. Ah, don’t you love tourism? There were two boardwalks down to Foxy Beach, which brought us quite close to the masses of penguins resting on the beach, or entering/exiting the water. Needless to say, I lingered as long as possible and took as many photos as possible, until my friends dragged me away!

We then returned towards the car park and headed down to the Beach (which we later found out was the actual Boulders Beach). It was a small golden sandy beach, with far fewer people were than at the boardwalks – only a few families with children paddling in the water. Of course, there were big boulders, so the Three Musketeers proceeded to climb them, get wedged between them, and lose their shorts. (It was only on returning to the car that we discovered a spare pair of swimming trunks, AND a sign telling us not to climb on the rocks – oops x2). While the rest were taking a welcome climbing and swimming break (the East Coast waters of the Indian Ocean are a few degrees warmer than the Atlantic Ocean on the West Coast), Lauri and I were entertaining ourselves watching the penguins lazing on the nearby boulders. I became very friendly with one penguin in particular, and was even kind enough to pose for many many photos, with me, and on his own. A model in the making… 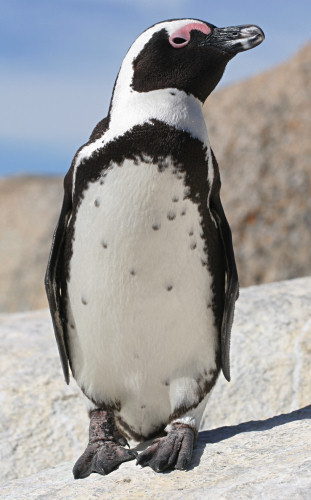 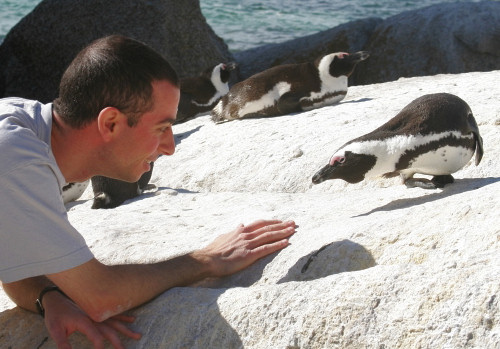 Penguined-, rocked- and swam-out, we headed back to Cape Town to enjoy our first fine sunset, from Signal Hill. Howling winds did little to dampen my spirits as I snapped away at the beautiful golden light shining on the side of Table Mountain, and got the first of many great sunset photos. 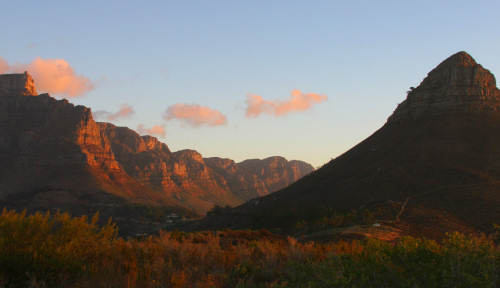 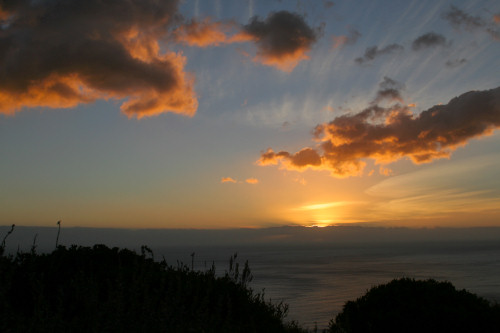